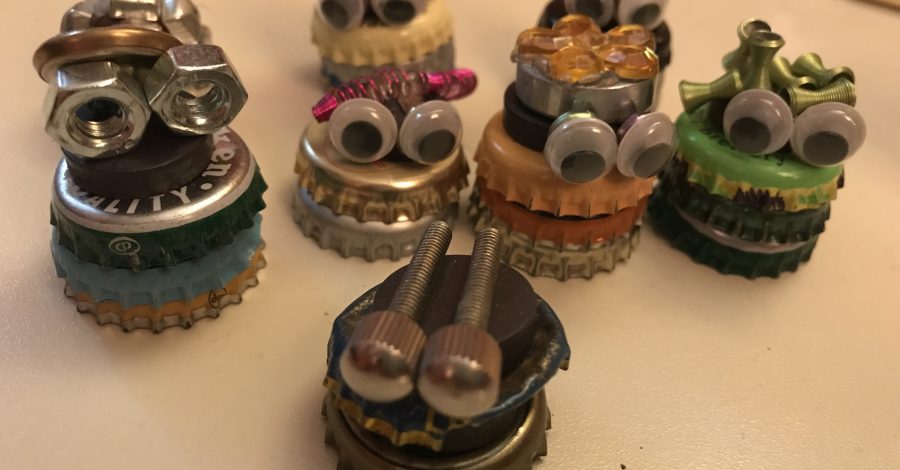 Want to create a gift with some hefty play potential? Nothing says “inventor” like magnetic bits and bobs! Best of all, they can be dissolved back into their original components in the end, reducing the clutter and throw-away aspect of most crafts 🙂

This “mag-bot kit” has been one of our ultimate catalysts for deep play. Take what’s here and improvise your own version; the principles are the same and will help you compose ANY ultimate loose part collection!

I get sort of obsessed with magnets + metal!!!! And for good reason! The magnet theme has it all: super satisfying loose parts, infinite expansion, cheap-thrift, open-ended as it gets, and great evolution of complexity as kids get older.

It all started when my middle son was 5. Since video games were off limits, he invented a substitute: little tanks made out of bottle caps + magnets + screws.

Then Magbot Villages arose, with all 3 kids playing in their cooperative town for up to 5 hours at a time, day after day after day.

It was probably our family’s most epic, joyful marathon of play ever!

The kids would send out teams of magnet-robots to salvage scrap metals from the landscape to bring back to the scientists and inventors who would create more robots, tools, and power sources to then sell to each other.

Parts and bits would get organized into jars, and new model robots would be on display at “Tanks’R’Us”. I would overhear constant commerce and trade; the game was so engaging and fun that they didn’t even fight!

My 11 year old tells me that if the game ever started to feel stale they would send in an army of wooden soldiers (with clothespin cannons) to demolish it all and then start again from scratch!

The creativity factor with this stuff is through the roof! Basically anything can become an accessory — even googly eyes! Just hot glue them to the ends of screws and provide them in the kit!)

I found a bunch of calligraphy pen tips that belonged to my grandpa, which were fantastic!! And KEYS are awesome too 🙂

I basically walk around thrift stores with a magnet in my pocket! You’d be amazed how many necklaces and funky earrings are attracted…which then become cheap scrap metal for the tinkerbot expansion!

I love our sewing kit as storage, but there are probably lots of really cool ways to present it….(let me know what you come up with!)

I love this one because it tucks away easy and folds out in a great gesture of invitation….

We also pull this same kit out when we want to do hammer & nail projects with stumps or styrofoam. Or if we are doing metal detector fun in the rice box. When little friends come over it is a super impressive and unique feature!

Oh, and one last vital ingredient: you will need LOTS of strong magnets. The more the better. I bought at least 4 of these…

(p.s. strong magnets are dangerous for babies and pets if ingested because they can close off the digestive track if they attach to each other inside the body! so be careful!)

Do also provide wooden blocks to work with, metal platforms such as cookie sheets, muffin tins, or combine with your other favourite magnetic toys (we love Magformers). We also have a zillion jars that became part of the game.

Here is another eyeball idea — what are those little doo-hickeys called that fasten through hole punched paper, like in a duotang? They work great!

I hope this little tutorial sparks a passion for loose parts and the endless possibilities! It makes such a great mega-gift, or even just a little starter kit for cousins, to get them intrigued!

Finally, my golden rule of deep imaginative play zones: LEAVE IT UP!!! Respect the depth of what they have created. Our set ups sometimes last for weeks, and how awesome is that?! To me, it is a joy. For as long as they are stewarding the resources with care, and for as long as they are invested in its continuance, I respond with pure delight and keep supporting the expression.

Because I grant them this honour, their set ups look like fascinating exhibits, well curated, very loved; if, however, a child’s play dissolves into chaos, they need to clean it up. That’s my little rule of thumb 🙂

The gift you deposit when you revere their creative play is worth more than the gift of the loose parts themselves. It is the deepest affirmation you can give, and its ramifications are boundless. They will be more inclined to play their hearts out again next time, even deeper yet. And (this is so lovely!) they will show you more honour and respect because you have honoured and respected their most fundamental need.

Thanks for reading! This is me, Gigi, author of A Whole Other Magic 🙂

If you are looking for a delightfully inspired children’s book to add more magic to your free play world, check out my self-published book, A Whole Other Magic on Amazon. The illustrations by Alisa Day Reeves are absolutely stunning!

Magical Underwhelm: The gift of “Less and Not Yet” » 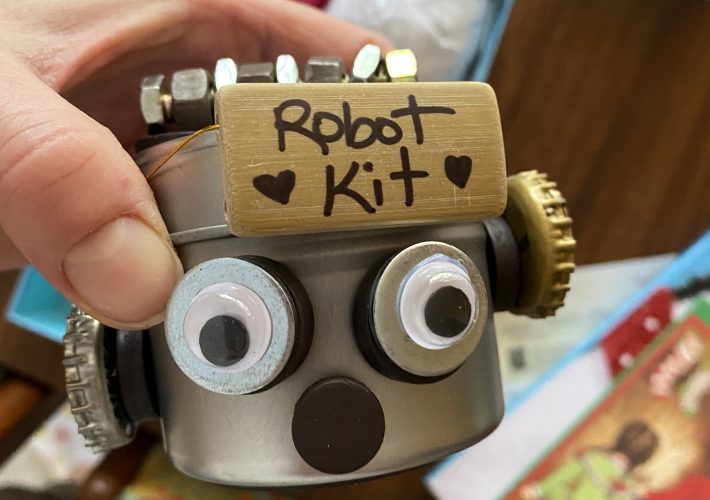